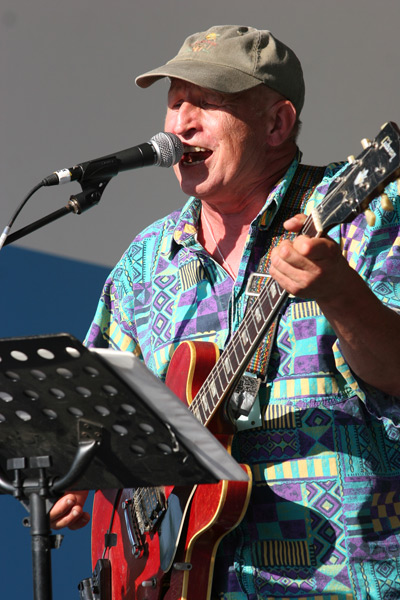 Reggae meets Finland, eh? Take a multicultural vacation with Conga Se Menne. Formed in 1994 by Derrell Syria, Conga Se Menne takes Syrias original compositions and songs, arranges them utilizing elements of both Finnish traditional music and Jamaican reggae, adds in comedy lyrics about Yoopers and other facets of U.P. life, and performs them on guitar, bass, keyboards and percussion instruments (and occasionally horns). Whew. So how did they get to this admittedly zany mix of musical styles?

I am 100 percent Finnish - second generation American - and Im influenced by many different genres of music, Derrell Syria explains. Our aim when Conga Se Menne was founded was to perform my tunes in a reggae-slash-traditional Finnish style. The name of the band is a play on words taken from the Finnish phrase kuinka se mene, meaning how are you doing?

Syria says that the band started out as a three-piece, but today has evolved into a floating cast of musicians, ranging from two to seven, depending on the gig and venue. They include Derrell and Ethan Syria, Dave Ziegner, Jerry Kippola, Gary Parkonnen, Paul Neumann and Aaron Kippola. Cliff Porter, Kay Smith and Lorie Hayes occasionally join in the fun.

Living along the chilly shores of Lake Superior has kept this band focused on their music - and the remote location hasnt kept them from being noticed. Beat Magazine tapped them for one of their Best Of lists, and the musicians excellent skills often surprise those who arrive expecting to hear nothing more than a novelty act. But these are serious musicians who simply enjoy being... well, quirky.

The Yooper influences were intentional when I wrote my lyrics, Syria says. Theyre based on the lifestyles of the people who live in the North - not only in the U.P. - so I threw in some subtle humor.

Subtle, perhaps, to the Yoopers who live directly within Syrias tales of life in the North country. But to those based elsewhere, the songs sing of scenarios only seen in movies.

I write humorous lyrics about taking saunas then jumping into the snow, or drinking a couple of beers and playing a little cribbage, Syria chuckles.

Other Conga Se Menne tunes delve even further into U.P./Finnish culture, relating tales of working in the woods or the mines, trapping and fishing, and even the legend of Heikki Lunta, a mythological Finnish hero of the U.P. who is said to make it snow when he dances.

CARE FOR A VACATION?

Things really get wacky when Conga Se Menne puts music to those lyrics; first, being the Finnish influence.

The story lines about the culture and geography in the U.P. are blended with the Finnish Schodisch and Polka, Syria explains.

Then, he says, reggae rhythms and melodies are added in, taking both the band and audience on a musical vacation... to your choice of Finland or Jamaica, depending on which musical elements you choose to focus on.

Ive always been fond of music from the islands, so Ive used that tropical musical feeling with help from my band mates, Syria continues, most of our material is presented with a calypso/reggae feel, with added percussion breaks and some experimental vocals.

Syrias unique musical blend is definitely working for Conga Se Menne. Theyve recorded four albums, and are working on their fifth, and are in-demand as performers around the region, throughout the U.S and in parts of Canada